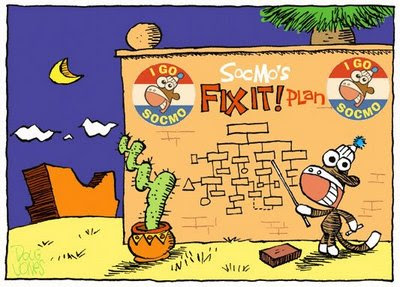 SocMo has a plan to REPAIR our country. It is the only plan that will really FIX IT! But first you have to elect him president. So when you go to the polls, remember to write in SocMo! That Tiger Woods guy and Yosemite Sam both have plans, but they won't FIX IT like SocMo's plan will FIX IT. SocMo's plan will FIX IT and FIX IT good! And it will stay FIXED! So vote for the FIX IT guy... vote SocMo!
Posted by Doug at 4:35 AM 9 comments: 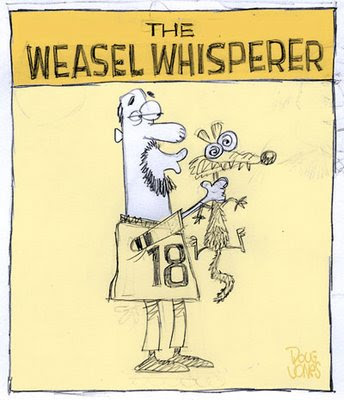 Here is a sketch I made while watching the final presidential debate last night. I think it could be a new TV series... what do you think?
Posted by Doug at 10:07 AM 4 comments: 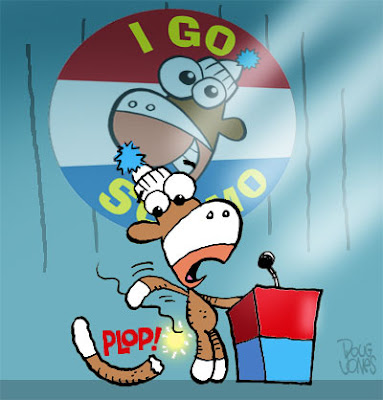 During a campaign speech, SocMo noticed a loose STRING... pulled it... and his tail fell off.
________________________
My personal challenge is to take the Illustration Friday word, combine it with SocMo, throw in his presidential campaign and see if I can squeeze an idea out of it. Sometimes it is easy... but usually it isn't. When I am having trouble coming up with an idea, I have to remind myself of the advice that Charles Schulz would give. He said after all, cartooning is just drawing funny pictures. So I defaulted back to just drawing a funny picture... and got my idea.
Posted by Doug at 6:43 AM 9 comments: 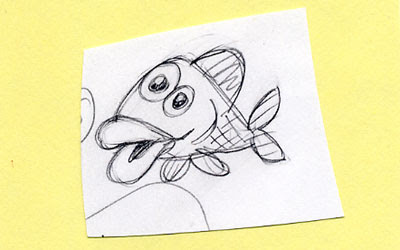 It's Funny Fishy Friday! This is another very old sketch from way back. This reminds me, there was a time when frozen fish sticks were a staple in my diet. Those days are long gone now. No more frozen Burritos either. But I do pop in a frozen DiGiorno pizza once in a while....ummmm good!
Posted by Doug at 7:49 AM 4 comments: 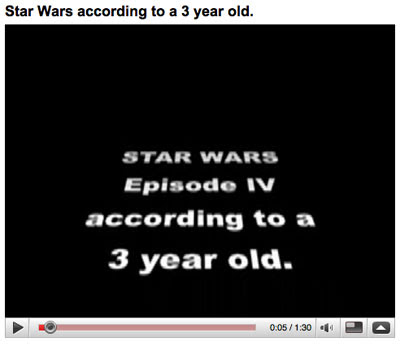 I know what you are thinking. What is Star Wars all about? I need help understanding it all. Well, here is help. Star Wars explained by a 3 year old. Watch this... it will be the best one and a half minutes you spend today!

CLICK HERE TO SEE THE VIDEO
Posted by Doug at 7:07 AM 3 comments: 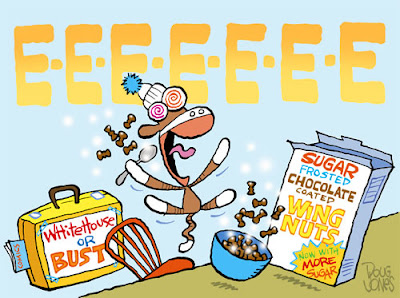 Running a presidential campaign requires a lot of energy. That is why front runner SocMo starts each day with a great big SUGARY bowl of Sugar Frosted Chocolate Coated Wing Nuts. His bag is PACKED, and he is confident that the American people will be sending him to the White House very soon. I mean... just look at the other two candidates... this is NO contest!
----------------------------------------------

Since I missed last week on Illustration Friday, I combined the word for last week with this week. A two for one deal!

This month JONESAPALOOZA is THREE years old! In October 2005 I found Illustration Friday and wanted to play along. I created this blog as a place to put my entries. If you would like to see my very first entry just CLICK HERE. I needed a character to use for the word FLOAT, so I used a character based on an old sock monkey I had when I was small. SocMo's looks have changed some since then, but he has appeared in a lot of IF challenges and is now running for President of the U.S. of A.! WOo.

The quality of my Illustration Friday entries is all over the board. Some were well thought out and carefully executed, while others were dashed out in minutes. I have also learned a lot about Photoshop over the last 3 years here. This is where I do some experimenting with Photoshop to see what happens if I do THIS. Some expeirments work out OK, others don't... but I post them all. Even this week I was trying to figure out how to add the letters behind SocMo as an add on after I had finished the illustration. A good little challenge, but I did it!

As a special bonus for SocMo fans, I have now painstakingly gone through 3 years of posts and added some labels. If you go to the side bar and look under LABELS, you will find ALL SocMo postings grouped by years. Click on a year and take a walk down memory lane. Please... SOMEbody do it... or else I have just wasted my entire Sunday afternoon.
Posted by Doug at 4:53 AM 9 comments: 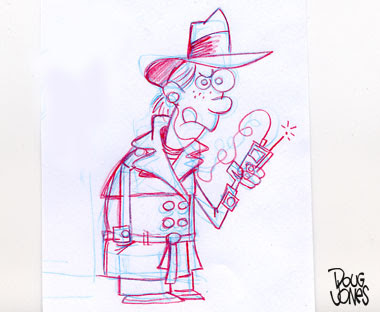 It's a secret agent kind of guy. I think he can listen in on other people's conversations with his special iPod. It is special because it has that little antenna, see? There are little marks coming from the antenna that indicate he is listening to classified government secrets... or MIchael Buble...
Posted by Doug at 4:52 AM 1 comment: 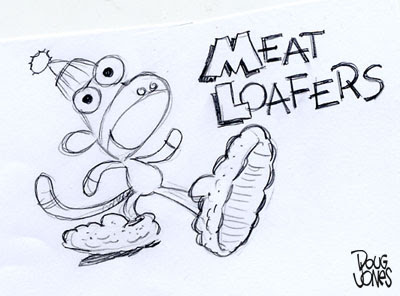 Here is a very old sketch from the bottom of a pile. I think the final version of this probably appeared as an Illustration Friday post. I was hoping meat loafers would catch on. If you get hungry you can eat a shoe... and later have the other one for lunch. But then you have to walk home barefoot. Oh, well.... back to the drawing board...
Posted by Doug at 5:04 AM 4 comments: 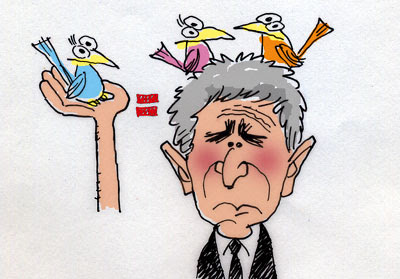 "A bird in the hand is worth two in the Bush"

I had to illustrate a few proverbs and wise sayings recently. While I was sketching on this one, I thought of this twist on the saying. It has probably been done before... by someone else... but I thought of it all by myself. So there. The sketch was such a mess that I decided to clean it up a bit and add some color. This could be our whole problem... too many birds in the Bush.
Posted by Doug at 5:26 AM 6 comments: