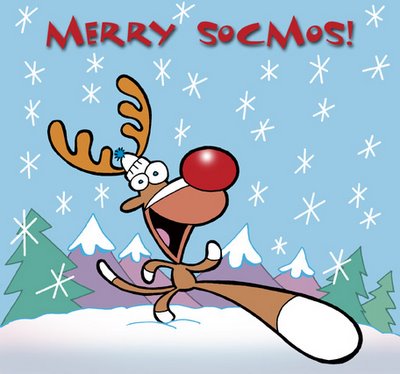 There just aren't enough holidays for SocMo, so he has created his own HOLIDAY. It is called SOCMOS.

The rules and regulations governing SOCMOS rival the U.S. tax code in sheer volume. However, it basically works like this. Pick any day AFTER Christmas but BEFORE New Years and declare it SOCMOS.

On that day, when you get up (sleeping in is highly encouraged) the first thing you do is eat a banana and yell, "Merry Socmos!" From that point on, you are to do ABSOLUTELY ANYTHING YOU WANT FOR THE REST OF THE DAY! 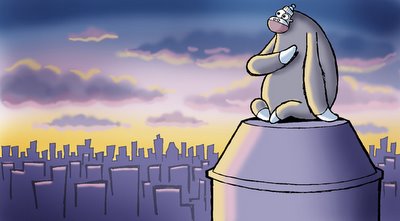 After watching King Kong, SocMo could only IMAGINE what it would be like to be 25 feet tall. I IMAGINE you will understand SocMo's gesture better after you have seen the movie... which is incredible.
Posted by Doug at 8:59 PM 32 comments: 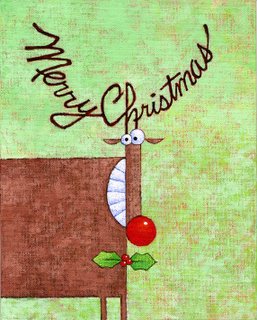 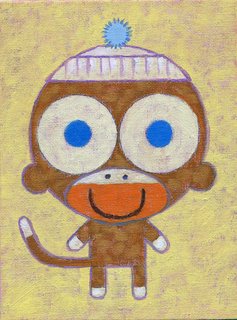 I was inspired recently by the small paintings on Leif Peng's website. Thanks to Leif, I now know that this style is known as kawaii. I think of it as the HELLO KITTY style. Big heads... and OH so cute! I tried some plein air landscape painting this summer (I haven't got the hang of it yet... but that's another story) and had some small canvas panels and water soluble oil paint setting around. I thought I would have a go at painting SocMo in this style. I am still not very adept at using oils. I could have done something quicker with less mess using Adobe Illustrator... but It IS fun to use an actual brush now and then. What I miss the most is not being able to hit the redo button. I can make endless changes and try out color after color with digits. I have one shot at choosing the correct color when I paint... I CAN'T HANDLE THE PRESSURE! Choosing the background color was a HUGE decision... and I'm still not sure about it. Oh, well....
Posted by Doug at 6:24 PM 7 comments:

If you are looking for my Illustration Friday entry scroll on down... then come back here.

People are always curious about where ideas come from, so I thought I woud recreate how I got the idea for this week's word.

> SocMo is fun to play around with. I have a mental list of some situations it would be fun to stick him in or different styles I could draw him in. I have always liked the Wizard of Oz and the flying monkeys. SocMo as one of the monkeys was one idea in the back of my mind.

> I saw that the new Illustration Friday word was SURPRISE... I have the usual blank mind. Nothing springs to mind, but I file this word away and continue to ponder it.

> At some point I begin some serious cogitation of a SURPRISE idea. (I had to throw that word in... are you impressed?) This is also the Christmas season with all of the images that brings to mind. I think of Santa Claus... and the sleigh... then I remember a Christmas card I made many years ago. I had Santa in the sleigh but instead of reindeer pulling him, I had several famous flying characters... Peter Pan, Dumbo, Mary Poppins, the flying nun and Snoopy on his doghouse.

> Well, if SocMo could fly, he could join the group pulling the sleigh. The Oz monkeys came back to mind... and SocMo in a jacket with wings would make it all possible. Hmmm... But SocMo has to be out front since he is the star... that would mean he would replace Rudolph. Hey, it would be a SURPRISE if SocMo replaced Rudolph for the big Christmas Eve run! BINGO... I have my idea!

> To keep it all simple, (I don't have lots of time to devote to these things) I decided to focus on SocMo and a few reindeer to get the point across and not bother with drawing up Santa and the sleigh and all that stuff.

...and THAT is how it all came about. I hope you found this interesting. It seems that the more things I can put in the bowl and stir around with the word of the week, the better chances I have of some of them coming together and turning into an idea.
Posted by Doug at 12:48 PM 2 comments: 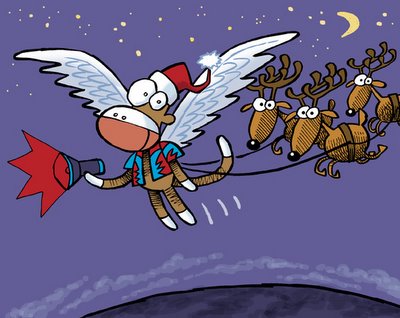 In a SURPRISE move, SocMo gave Rudolph the night off and led Santa's sleigh on Christmas Eve! 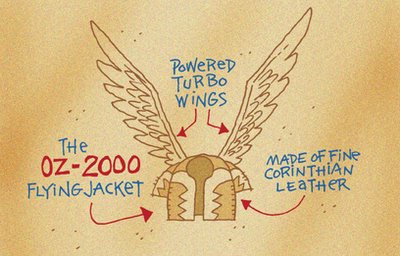 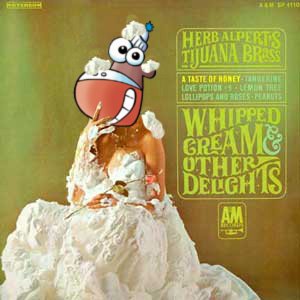 This was one of my favorite albums from 1965. SocMo did a great job on the vocals and an excellent job playing the maracas.

SocMo had just finished eating a crate of Readi Whip he had found when this picture was taken.
Posted by Doug at 1:58 PM 7 comments:

Speaking of Marge Simpson... this picture appeared in the paper recently... you be the judge!
Posted by Doug at 1:50 PM 1 comment: 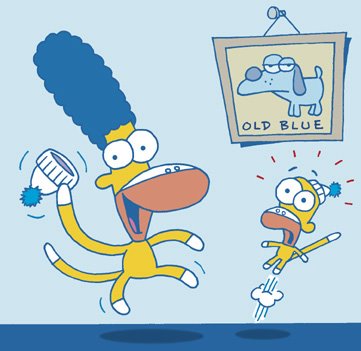 What is under SocMo's cap? It's BLUE hair! Good Golly Bum!
... SocMo is a Simpson!

Here are some preliminary doodles I did on this week's idea. I had been thinking of doing SocMo in various cartoon styles. I was wondering how he would look as a Simpson. When I saw the word for this week, I was playing around with the idea and BINGO... that iconic BLUE hair came to mind. Then I was trying to find something else to add to the scene. I like the little side kick. I think they make a good team... Mutt and Jeff. Anyway, it was fun to do. 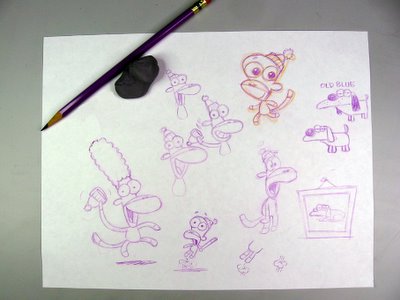