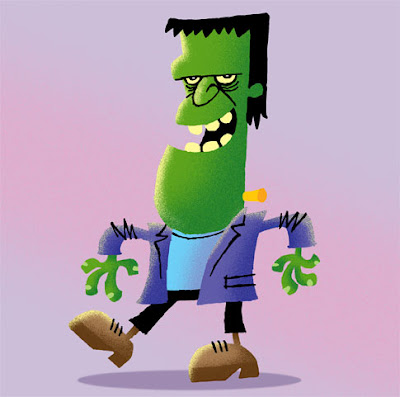 When I was a kid, I made a lot of plastic models. Model cars, customized hot rods, and some scary Famous Monsters of filmland. I assembled and painted a Frankenstein, Mummy, Dracula and Creature from the Black Lagoon. I can't believe it is almost Halloween and I have not posted anything scary yet. So here you go, my version of Frankenstein... with a not too scary smile.
Posted by Doug at 3:50 PM 4 comments: 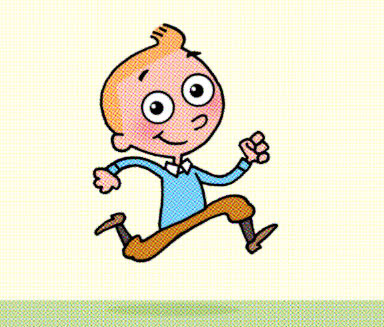 I think I discovered Tintin books decades ago while poking around in some bookstore (a favorite activity that is getting harder and harder to do these days). I immediately liked the clean drawing style, detailed backgrounds and the adventures Tintin got involved in. I never dreamed that someday it would be a movie.

Now Steven Spielberg and Peter Jackson are bringing Tintin to the big screen. The movie trailer looks pretty good. I am just hoping that the motion capture stays cartoony and does not get into the uncanny valley like the Polar Express did. It was just creepy.

I have been re-reading some Tintin adventures lately to reacquaint myself with the characters. I also found some interesting things on Youtube about the creator Herge. There is a very enlightening documentary about Herge that was on P.O.V. a few years ago. If you are a fan, I would recommend watching it. You can find it by clicking here.

I thought it would be fun to make a younger version of Tintin. Then I decided to try a filter to give it a comic book look. So here you go... Tintin's younger brother Ninenine. 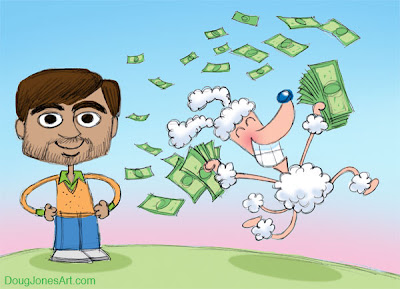 Keeping the Fantasy in Fantasy Football.

Week 5 in the AWFFL fantasy football league. The fabulously wealthy but winless 0-4 Aziz Ansari have their first win of the season against the Penultimate Poodles... who suddenly are rolling in tons of cash.

Connect the dots. It's pretty easy.

When asked about integrity, the Poodles replied, "Integrity is something we can buy with lots of cash... but first we are going to build a new pink clubhouse with a hot yoga studio and a Mr. Smoothie bar."

In spite of this loss, the Poodles are in a 3 way tie for first place in the Bipolar Division.

Next game puts the Poodles up against the Tight-Jean Juggernauts of the Dementia Division.
Posted by Doug at 8:45 AM No comments: 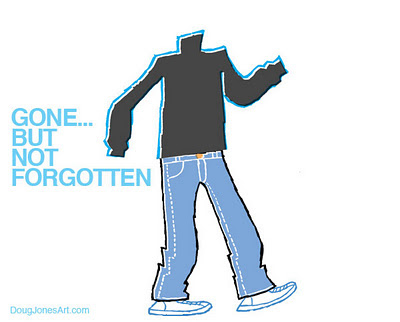 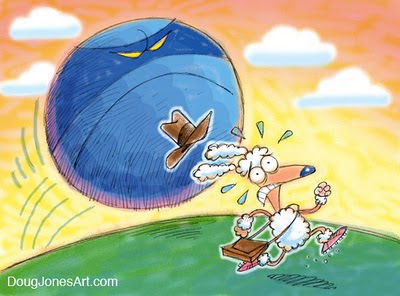 Keeping the Fantasy in Fantasy Football.

Week 4 in the AWFFL fantasy football league. The Penultimate Poodles traveled to Mashachusetts, home of the 3-0 league leading Mashers for this week's game. The huge blue Masher Stadium was filled with Masher fanatics. The Masherettes led the crowd from the sidelines as they chanted "Mash-em Up, Mash-em Up, Mash!, Mash!, Mash!" The Poodles were so intimidated they had to spend an extra 20 minutes in the Downward Dog yoga pose to calm their nerves.

The game was hard fought. Many manicured toenails were scuffed and some even broken! The Poodle's hairspray gave out in the 3rd quarter and morale was at a low. But then, rallying at the sound of the 2 minute warning, the Poodles pulled together for one last campaign. As the ball was snapped, Percy Poodle screamed, "Shoe's untied!" The entire Masher defense said, "Huh?" and started looking down at their feet.

The Poods then crammed the ball into their Indiana Jones satchel and sprinted for the goal line. Upon seeing they had been fooled, the Mashers released their Boulder of Death. As the gigantic Masher ball bore down on them, the Poods zigged and zagged and fought their way through the cobwebs as the goal line grew near. All would have been lost... but the Pood's trainer had made sure his team was wearing the proper footwear for Masher Stadium. Jimmy Choo pink cleats. With this extra edge, the Poods crossed the goal line to victory!

The Poodles had done what no other team had done up to this point... beat the Mashers. There was much rejoicing in the Poodle clubhouse as cans of hairspray were dispensed, Perrier flowed like... uh, water, and complimentary manicures were done for all.
Posted by Doug at 8:44 AM No comments: 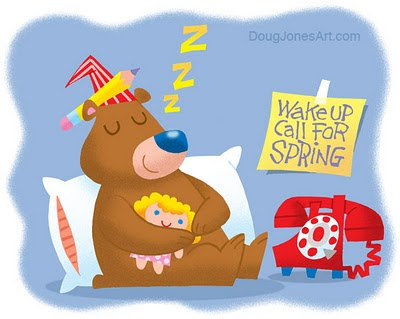 I took the Illustration Friday prompt word "hibernate" and tried something a little different this time. I got rid of the black lines that I usually have in my work, and tried to use shape and color to define things. Hope you like it!
Posted by Doug at 1:31 PM 11 comments: