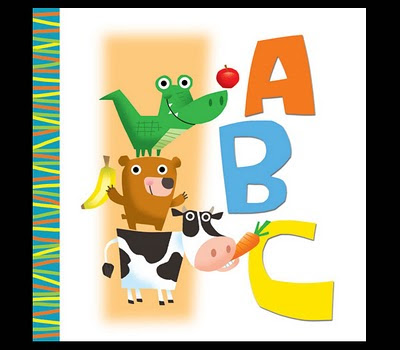 Last weekend I attended the Mid South SCBWI conference. There was a contest that attending illustrators could enter. It got down to the week of the conference before I finally got a little time to put together this book cover. One of the options for the contest was to create a 10x10 cover with the letters ABC as part of the art.

I thought it would be fun to try something a bit different, so I cut all of the shapes for the illustration out of black paper. 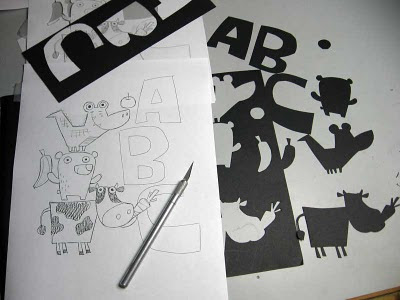 I scanned the black shapes, and then assembled and colored them in Photoshop. I liked the results. A square cover is a very boring shape. I ran a little strip down the left side that made the white space a bit less square. I also repeated the vertical strip with the vertical animals and letters. Lots of fun to do.

I seem to gravitate toward making things simple and fun. But alas, simple and fun does not win against incredibly well rendered illustrations. The winning pieces were really nice. Congrats to all. Gather around children, and let me tell you of the days before everyone walked around with a phone in his pocket. When I was little I read a comic strip in the newspaper (do you remember newspapers?) called Dick Tracy. Dick Tracy would talk on his 2-Way Wrist Radio. You knew it was a 2-Way Wrist Radio because there was a little arrow pointing to it telling you. This was the stuff of science fiction. To think you could communicate with someone with a watch like radio. No way.

Later there was Maxwell Smart. The spy from Control who talked into his shoe phone. A bit awkward for sure, but nevertheless a portable phone. He did have to dial it... but still... this was technology only a spy could have.

Today everyone takes phones for granted. Leave home without your phone and you feel nekkid!

Except for me. I still use tin cans with string. 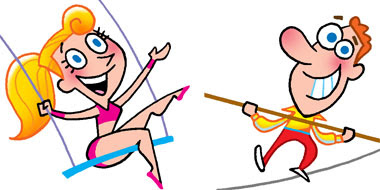 Wow, I have almost missed Illustration Friday again! Tomorrow is Friday and a NEW word will be announced. But just under the wire, here are a couple of acrobats. These were part of a collection of images I created for the Facebook game PackRat. I will have to try to be more timely in posting things in the future. Or... I could just go back in time and post this earlier, if my time machine was not in the shop. Those pesky flux capacitors keep going out on me...
Posted by Doug at 12:33 PM 3 comments: 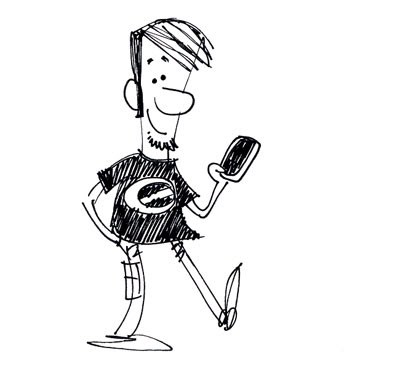 Today's warm up doodle. Micron on copy paper.
Posted by Doug at 8:37 AM No comments:

As the proverb says: A journey of a thousand miles begins with a single step.

This week marked the first step in the Fantasy Football league I have joined. Before you stop reading... let me tell you about our league. It is AWFFL, which stands for Another Worthless Fantasy Football League. And it IS awful... awful fun! It is a family affair. All the other league members are related to me. There are brothers, nephews, kids... and the wife of a nephew. We run the gamut from those who have followed the NFL for decades... to those who have never watched a game.

Our league has two Divisions. The Bipolar Division and the Dementia Division. I am glad I was assigned to one of the Divisions, because I could have never chosen between the two.

The first game is now in the record books. The POODLES limped to their locker room with their tails between their legs after a bitter loss. After a round of Purina Poodle Chow, some Perrier water and some hot tubbin', the Poodles are ready for week two.

Next week we meet the PHLEGM. Hope we don't get slimed.

Stay tuned.
Posted by Doug at 4:28 AM No comments: 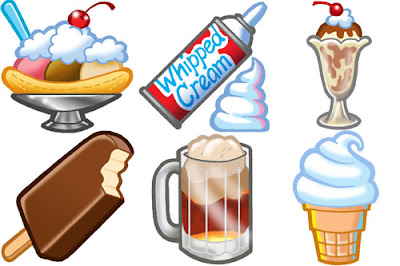 I create images for a game on Facebook called PackRat. It is a game of collecting little images. You find them, buy them, steal them from friends. These are a few I did recently for the Ice Cream Shoppe collection. These were really fun to do. Ice cream desserts are my favorite... wait, I like pie too... and cake... and pastries... and...
Posted by Doug at 8:31 AM 6 comments: 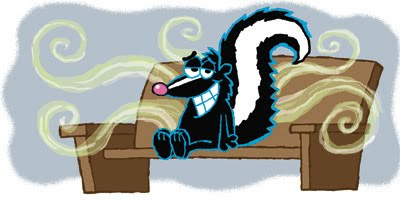 A Skunk on a pew is immovable. Would YOU want to tell him to leave?