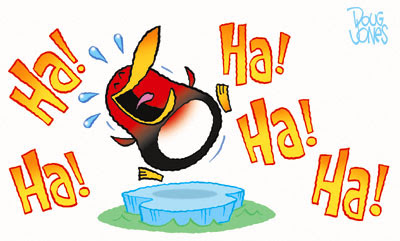 Q. What is black and white and red(read) all over?
A. A newspaper.

I remember first hearing this joke as a little kid. It rocked my small mind when I realized that the word I thought was red was actually read. The old switcheroo. This was probably the first joke I had heard that worked like this.

I have illustrated this joke several times for joke pages in kid magazines over the years... and the answer is never "a newspaper" anymore. It is always something like "an embarrassed zebra"... "a penguin holding its breath"... "a sunburned polar bear" or such. I had been thinking that since EVERYONE knows the old newspaper joke, this is just another switcheroo! You think the answer is "a newspaper" but then they trick you by saying it's something else.

But now I am not so sure.

Newspapers are disappearing off the American landscape like the mighty buffalo did many years ago. Now there are even more newspapers in financial trouble. Do kids even see a newspaper these days? Probably not. Maybe they wouldn't understand the original joke. "A newspaper? ...what's that?" Maybe the joke has to be retooled just so kids can understand it now.

I wonder how many newspapers will bite the dust in 2009? And just WHO will do the investigative reporting like Woodward and Bernstein then? Some news blogger sitting at his laptop in his pajamas? 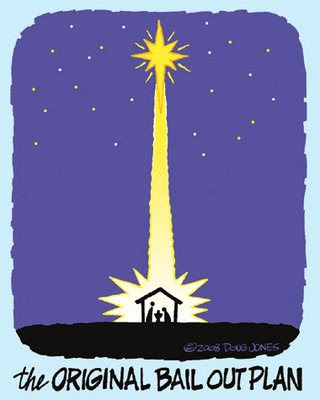 Wow... long time since the last post! I have been really busy for the last few weeks. After I got my deadlines met, I jumped into Christmas card mode and made this. Then, we all jumped into the car and drove to Missouri for an early family Christmas. Now I am back and regretting all the snacks I consumed during the last three days. (burp)

So... I would like to wish everyone who has stumbled by JONESAPALOOZA this year the best of the Holiday Season and a great new year in 2009!
Posted by Doug at 7:51 AM 9 comments: 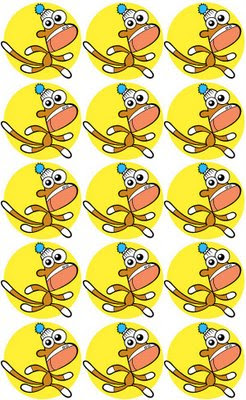 I think Socmo has some friends who are kiddos. So for all the kids out there, here is a puzzle for you. All of the SocMos here are identical to each other except for one. One SocMo is only SIMILAR to all the rest. Can you find it?

As you are looking you might sing to yourself... "One of these things is not like the others"... I watched way TOO much Sesame Street years ago... 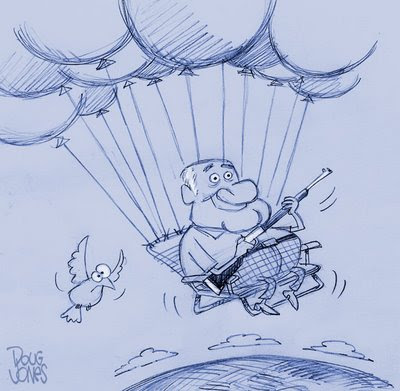 I have been busy busy lately and didn't think I would get anything done for Ilustration Friday again this week. But I managed to come up with a drawing at the end of the day yesterday thanks to TV reruns.

In 1982 Larry Walters tied 42 helium weather balloons to his lawn chair and took a trip. He wanted to go up a bit and hover over his neighborhood for a while. Instead he shot up to 16,000 feet (three miles) ... where it is pretty cold. A couple of airline pilots reported seeing a man in a lawn chair holding a gun as they flew by him. He had planned on shooting out some balloons to come back down. When he did descend, he tangled in some power lines and blacked out a Long Beach neighborhood for 20 minutes. The stunt got him a $1,500 fine from the FAA, and appearances on the Tonight Show and David Letterman.

Pixar's next movie is UP and looks like it may have been inspired by Larry. CLICK HERE to see the trailer. I can't wait!
Posted by Doug at 6:35 AM 12 comments: