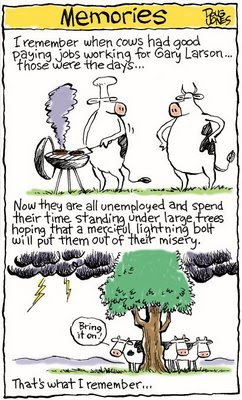 So... all weekend I had this word in the back of my mind, but had no ideas for it. Nothing. Sunday a supply line to the kitchen sink burst. Water was shooting out from under the sink like Old Faithful. I got soaked trying to find the cut off valve in the torrent. There went my Sunday afternoon. It is now fixed, with a shiny new faucet to boot! And I only ONCE, muttered one of the special words that I use for plumbing or car repair in the process. :0)

I finally got an Idea for the Illustration Friday word, and decided to try out some new materials with it. I had bought a pad of bristol board on a clearance sale... it had MANGA things on the cover so it HAD to be good stuff, right? Then I read about a cartoonist praising his pen point. So I just HAD to try one. The pen was totally out of my control. Huge blobs of ink globbed out as I was drawing with it. I was trying for a more scratchy irregular line... but the pen had a mind of its own. I decided that I don't like the paper OR the pen.

Oh, well... I added a bit of color to the drawing and it's good enough for this blog. We have very low standards here.
Posted by Doug at 6:00 AM

I thought you did a very good job, considering you didn't like the pen or the paper. Love the concept, ah yes, Gary Larson. I remember laughing to quite a few of his wacky cartoons. Thanks for the memory of slugs and salt. :)

Love it and thanks for your kind comments on my site... much appreciated as I admire your work VERY much!!!
Fab stuff!!

This is awesome! Great work!! Love it!

Great illustration! Definitly got me laughin! :)

Great idea and work- I totally remember those cows. Thanks for the comment...

DEFINITELY in the "awesome" category despite your protests. I LOVE this line work! I see no total lack of control here at all (nor accidental blobs that were turned into clouds or bushes, etc.) Me thinks you must be looking at this through some slick filter or something. I'd like to see you try the pen (and paper, I guess, but not necessarily) some more! ...Oh, c'mon, now...

LOL LOL LOL LOL. It's just to early in the morning! I really enjoyed this so much. Great work.

The drawing's great and the story's fun!